With spectacular views and a short approach, Mount Fairview is a must-do hike in the Lake Louise area of Banff National Park. Here is our experience summitting Mount Fairview with kids (and “Blank Space” by Taylor Swift; my girls kept singing it over and over).

Warning: this mountain may give you summit fever! 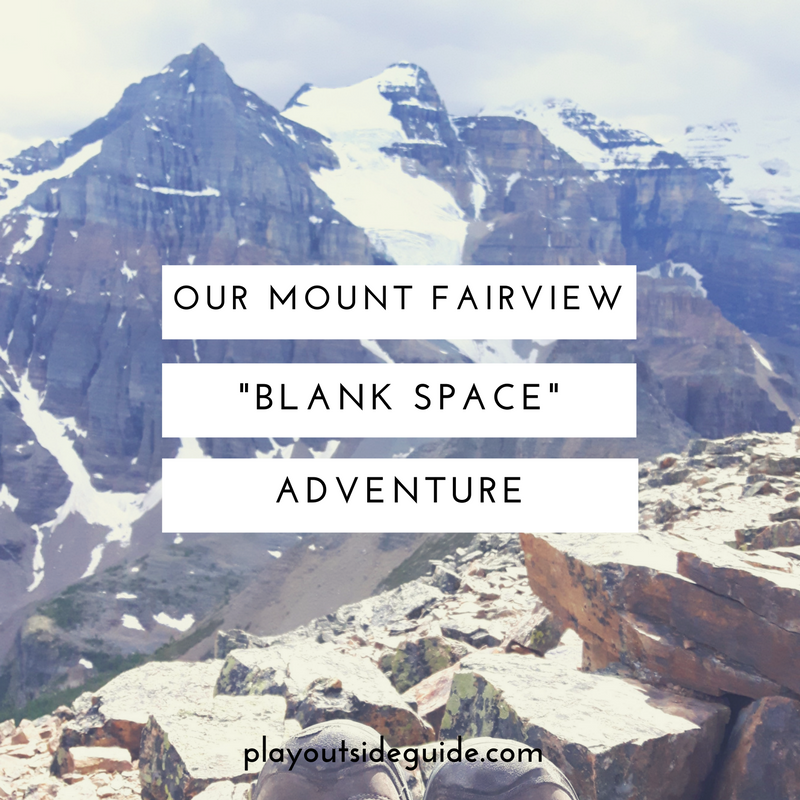 “Your kids made it to the summit of Fairview?! I have friends who’ve been heli-evacuated off that mountain!” a Lake Louise local exclaimed. A big hike for most people, Mount Fairview is an epic hike for a 5 year old (and pretty decent for a 7 year old)! How did we do it? Slowly and steadily, with treats, bribes, and a lie.

Our morning started off as glorious as can be in the Canadian Rockies, with Mount Temple bathed in golden light and blue sky in all directions. It was just what we needed after tent camping in the rain for 11 days. With the weather on our side, we resolved to do a real hike… something big. Mount Fairview seemed the natural choice as everything else was been there, done that; too long; or too technical. After whipping up a breakfast of champions and super strong coffee, we started packing. A 10 kilometre hike with 1,000 metres (3,281′) elevation gain would be an all day affair at our pace.
With food for days, ample water, and survival gear packed and double-checked, it was time to go. To our surprise, the parking lot at Lake Louise was full, so I dropped everyone off, drove down to Continental Divide and jogged back (850 m) to the trailhead near the boathouse. It was a good warm up and chance to gaze upon Deer Lodge, where we got engaged back in the day. Note: There is a free shuttle from the Village.
As hordes of tourists jockeyed for best photo locations at the lake, then filed to Lake Agnes Teahouse, we patted ourselves on the back for choosing the path less travelled. A few people overtook us as we paused to do very important things – like, you know, look at moss and eat m&m’s – but presently, the trail opened up. The passersby had all turned off at Fairview Lookout! From here on, we saw no more than 10 people all day! It was wonderful and worrisome at the same time since we were in prime grizzly territory, but our vocal Taylor Swift playlist deterred all carnivores.
As we emerged from the lush, forested trail and crossed avalanche slopes, we took in views of Lake Louise Ski Resort and Lake Louise. Although the lake looked small below us, Mount Fairview’s summit was still mockingly far away. A hundred refrains of “I’ve got a list of Starbucks lovers..” (my kids’ version of “I’ve got a long list of ex lovers”, LOL.) later, we came to the turnoff to Mount Fairview (go right at the fork). Around this time, a woman and her son passed us on their way down and said we were halfway to the pass. We thought she was crazy – we’ve been climbing forever, we have to be almost there – and she thought we were insane for wanting to summit Fairview (“They’ll tell you I’m insane..”). No matter who was right, tummies were rumbling, so we stopped for lunch in the first clearing we saw. Bustling pikas and marmots distracted us from the ominous clouds that loomed to the west. Before we knew it, rainclouds were right above us. Rain gear time.
All suited up, we made the final push to Saddleback through larches and meadows. Views opened up as we approached the pass and soon there were peaks all around us including iconic Mount Temple! We had done almost 600 metres of elevation gain in less than 4 kilometres, but everyone was in good spirits, so we decided to carry on as planned. Looking up at the peak, Big POG asked “Is Fairview as big as Prairie Mountain?” I quickly replied, “No way, this mountain’s much smaller! You’ve done lots of hikes bigger than this!” (“pretty lies”)

From here, the trail becomes incredibly steep (~450 m gain in 1.5 km), so it’s easy to lose perception of speed and time at Mini-Me pace. “You can tell me when it’s over, if the high was worth the pain.” It took about an hour to go from Saddleback to Fairview’s summit, but it felt longer. About halfway up, the girls started to doubt my claim that Fairview “wasn’t a super big mountain” and said they wanted to go back. We coaxed them on with chocolate and promised them Laggan’s treats after, but only if they put their happy pants on. Little POG and Big POG quickly stopped moaning and carried on through the loose rock. Within half an hour we were sitting on top of the world taking in a panoramic feast for the eyes. Glaciers and peaks surrounded us and Lake Louise glittered below. Little POG kept exclaiming “I can’t believe we did it!!”

After a long, well earned break at the top, we returned the way we came. ***Do NOT descend descend the north face, as there are dangerous cliffs below (look up from the lake if you don’t believe me).*** We could definitely feel our knees on the way down, but the kids ran down effortlessly like mountain goats “cause [they’re] young and [they’re] reckless.” We chased rainbows, listened for marmot whistles, and sang some more! In a couple hours, we were back where we started with daylight to spare, and headed in to the Village for a “good job treat”.

When we admitted to the girls that we’d lied about Prairie Mountain and they’d just climbed their biggest peak ever, they weren’t mad; they were stoked! They started listing off peaks they wanted to do next. “When can we climb Temple?!” “How big is Everest? Can I climb Everest when I’m bigger??” Beautiful Mount Fairview had given them summit fever! While Temple and Everest may be a ways off, we can dream and train! We can’t wait to bag more peaks as a family!!

Mount Fairview at a Glance

Distance: ~10 km
Elevation: ~1000 m
Difficulty: Class 1 scramble for steepness and loose rock (i.e. strenuous hike). New to scrambling? See my Tips for First Time Scrambling. Please note visitors from sea level may have a hard time as the summit is at 2744 m ( 9,003′).
Time: Allow 5-7 hours for adults and big kids. Allow more time with younger children. (We took 8.25 hours including 2 hours of breaks).
Nearest washrooms: Public washrooms in the public parking lot at Lake Louise.
Stroller friendly: No
Trailhead: Near the Lake Louise Boathouse
Route: Follow the signs to Saddleback/Mount Fairview. At the turnoff for Fairview Lookout (a few hundred metres in), continue straight. After a couple kilometres, you’ll get to the Saddleback turnoff – go right. Continue to the pass. From the pass, go to the right and take the switchbacks up Mount Fairview. There’s a well beaten path to the top. Come back the way you came (do NOT descend the north face – dangerous cliffs).

1. Get to the Lake Louise parking lot before 9:30 am to get a spot on the weekend. Other options are to take the shuttle from the Village or hike midweek.

2. Hike to Saddleback in late July to see wildflowers or late September to see the larches!

4. Check the trail report and avoid this trail when snow covered (avalanche risk).

What is your favorite peak?

The Ten Essential Systems: Wilderness Survival Gear to Bring on Every Adventure

Thanks Petra!! It was a super fun day!!

This is amazing. And inspiring. Thank you! ♥ for sharing your adventures! – Lifeinthepines 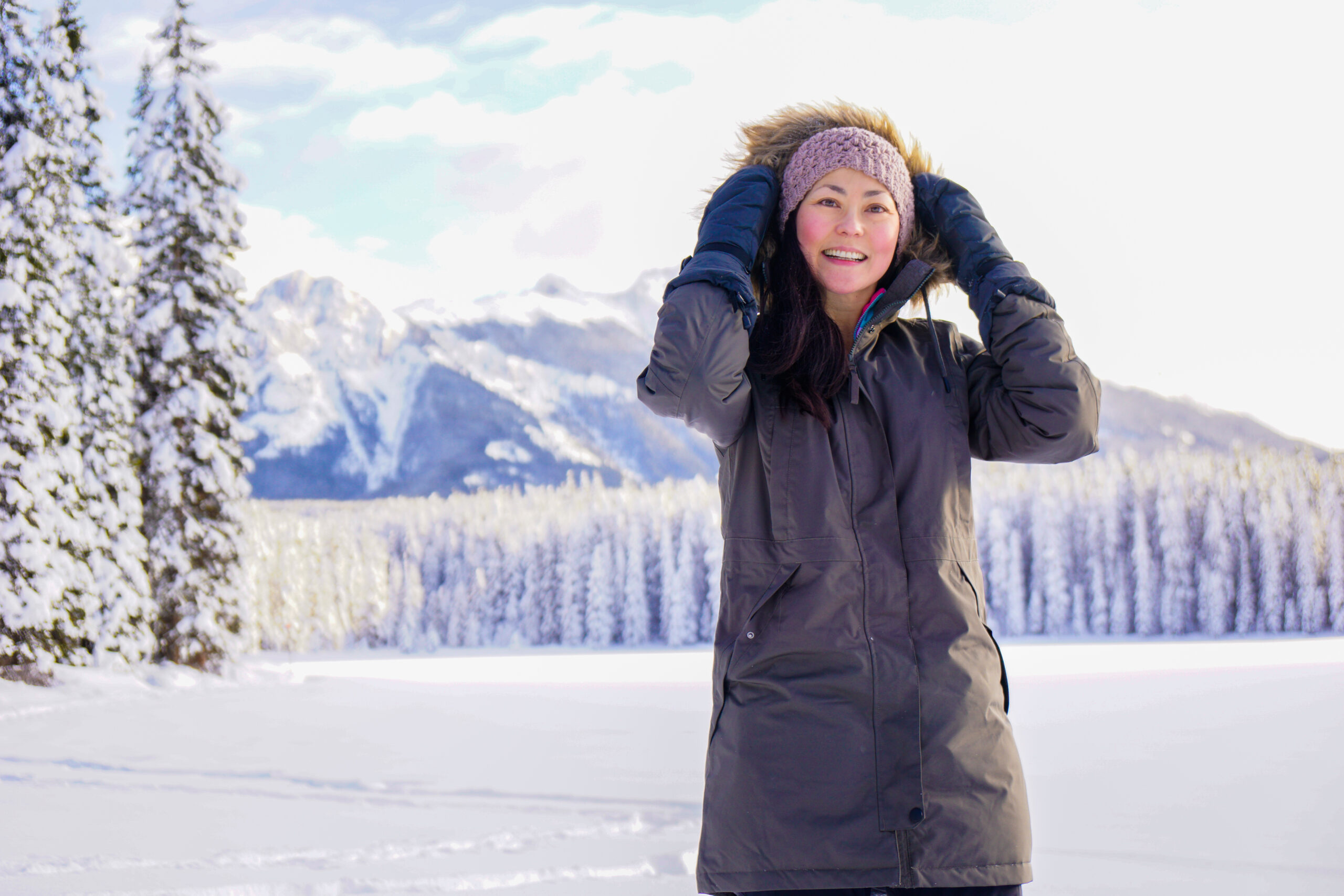